Will Meth Tests Become the Norm for Home Buyers

For most prospective home-buyers, building and pest inspections, asbestos inspections and pool safety inspections are the norm. However with the growing ice epidemic that is sweeping the nation, meth testing is now gaining traction. 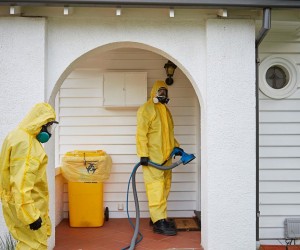 If methamphetamine is has been produced or smoked in a property, chemical residue and chemical by-products seep into porous surfaces and structural elements of the home including soft furnishings, carpets, walls and in some severe cases, structural timber. These chemicals and chemical by products can have serious health implications to current and future occupants for the property including respiratory disease and cognitive disorders.
In a case in Victoria, two children tested positive for methamphetamine after their family had unknowingly spent more than a year living in a former drug lab that had never been cleaned properly. While the council had informed the previous owner of their responsibility to have the property professionally decontaminated after it was uncovered by police, it was never remediated before it was sold to the unsuspecting family where the children became ill, forcing the family to move out and leave all of their potentially-contaminated belongings behind.
Forensic toxicologist Andrew Leibie has said meth lab testing may need to be offered as part of pre-purchase inspections for home buyers and pointed to New Zealand where a growing number of buyers are requesting checks for contamination, which had prompted the creation of national standards for meth-testing.
Read the full story online at domain.com.au here.
Buy at home meth testing kits here.
By methlabs|2020-09-01T11:10:36+10:00October 20, 2016|dangers of meth labs, meth in the news, meth testing kits|0 Comments