The Danger of Methamphetamine in the Community

Following the arrest of a 19-year-old Hong Kong gambling boat worker who was part of a drug trafficking syndicate behind the biggest ice haul in WA history, the need for appropriate community awareness and understand of methamphetamine and the dangers it appends to the community.
China-born Pak Cheong Cheung has been in custody since he and his accomplice Yik To Ng, 20, were found with 315kg of high-purity methylamphetamine and $1.18 million in cash at a Canning Vale house in September 2015.

Why is Methamphetamine so Addictive?

Highly addictive, meth burns up the body’s resources, creating a devastating dependence that can only be relieved by taking more of the drug. The physical and psychological effect cause by meth is highly concentrated, with many users report getting addicted from the first time they use it. Consequently, it is one of the hardest drug addictions to treat and some can die in its grip.
Meth creates an artificial pleasure sensation. It does this by mimicking the chemicals that, without drugs, would send pleasurable impulses to the brain. The problem with extended use of meth is that the brain can no longer tell the difference between artificial and natural pleasure signals

What are the Warning Signs of Meth Use?

Crystal meth is an extremely addicting drug, and has been known as one of the most dangerous street drugs due to its tendency to induce violent behaviour and its long-lasting effects.
One common sign that someone might be using meth is an onset of fidgety, obsessive behaviour, similar to those who suffer from obsessive compulsive disorder. Along with the fidgety behaviour, one is uncharacteristically talkative, to the point that they may be incoherently rambling. If a person suddenly seems hyperactive and obsessive, it may be an indication they are experimenting with methamphetamine. Physical symptoms of methamphetamine use include red eyes, dilated pupils, and sweating. Methamphetamine users often dart their eyes around not being able to concentrate on any one thing for very long.

According the Australian Crime Commission 2013, the growth in meth lab detections in Australia, particularly Queensland and Western Australia is significantly higher than past years.
The table below shows the alarming increase in clandestine drug labs being detected across Australia from 2003 – 2012. The alarming figures show just how prevalent drug labs and meth labs are in Queensland. According to the Australian Crime Commission statistics, close to 50% of drug labs detected across Australia are in Queensland. 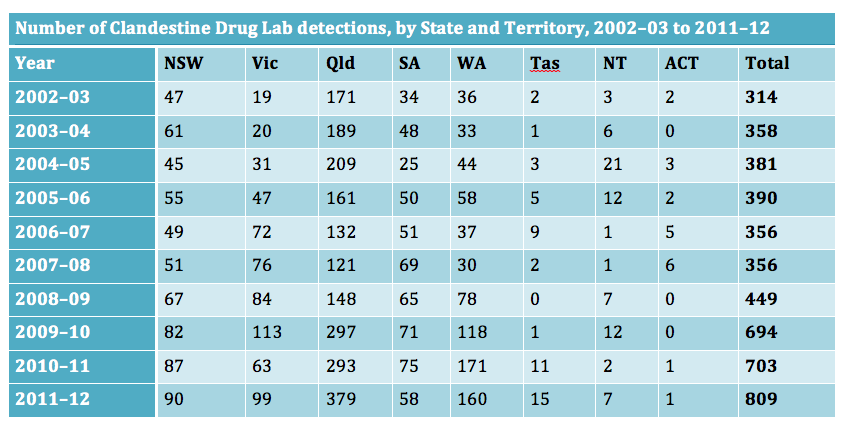 Making or cooking methamphetamine requires minimal training and experience and limited amounts of equipment and chemicals, both of which are relatively inexpensive. Meth Labs can be found in almost any location, from houses, apartments, cars, rental storage units and motorhomes. There are many external recognition clues alluding to a meth lab. Some of the common warning signs of a suspected meth lab include:

If you suspect that someone in your neighbourhood is operating a methamphetamine laboratory, report your concerns to the local police department immediately. For your own safety, do not investigate the suspected laboratory or confront the occupants. In addition to the hazards discussed above, many laboratories are equipped with security devices or booby traps that could cause serious injuries or death.

Meth lab decontamination can involve a number of stringent and important steps to ensure the property is left in a non-hazardous, occupiable state. The meth lab decontamination process involves both disposing of, and if possible, remediation of contaminated household items and structural elements. Meth Lab Cleaners Australia technicians are trained and certified to safety decontaminate the property and dispose of any contaminated furniture, house hold items, fixtures, carpets, wall sheeting etc. and provide independent, regulated environmental testing reports for the premises.
At Meth Lab Cleaners Australia, we use the latest technology available to quickly and easily decontaminate your property. Our process generally requires very little tear-out or reconstruction, making it quite affordable. If you have property insurance, it’s likely that your insurer will pay for some or most of the cost of decontamination. In fact, we’ll work directly with your insurance company to take care of those details as much as possible.